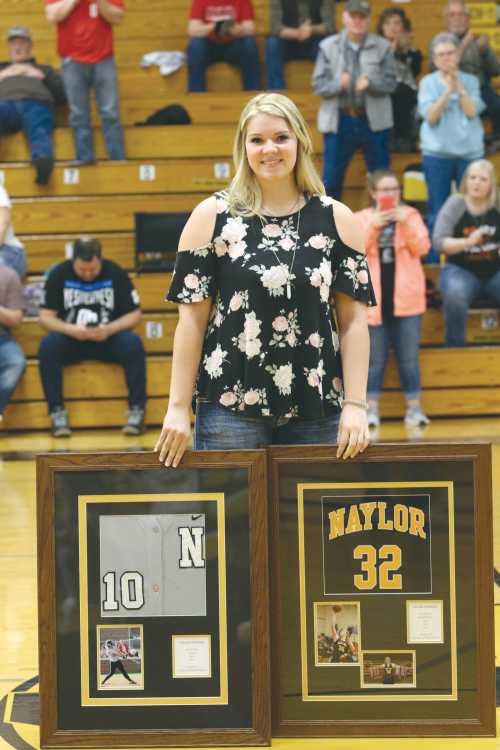 Naylor’s Callee Pickrell had her softball and basketball jerseys retired Saturday during halftime of the Naylor boys’ Ozark Foothills Conference Tournament game, where she was presented with her framed jerseys.

“I was nervous. I don’t know why, I’ve played in two state championships games. I don’t know how many people were there, but I was standing out there and it all kind of hit me I guess,” Pickrell said. “I’m blessed to be able to go out there and have these both retired and hold the record at school.”

The jerseys will hang in the lobby outside the Naylor gymnasium, alongside every other Eagle who made an All-State team.

“I think it will be pretty cool,” Pickrell said. “When I was a little kid my mom worked there, I would go by and read all of them and think it would be cool to have mine up there. Now it’s real.”

Pickrell finished as the all-time leading scorer in Lady Eagle history with 2,154 career points and averaged more than 26 points per game her senior year. She played in two basketball state championship games, was a four-time unanimous All-Conference player, four-time All-District player, and only the second Lady Eagle to be selected to the All-State team three times.

In softball, Pickrell led Naylor all four years in hits, RBIs and home runs. Her athleticism and arm strength allowed her to play four different positions during her career. She started at third base and finished in center field.

She was a lifetime .500 hitter and won a district championship as a freshman.

“Our teams have always been close. We’ve been like family since I was a freshman in high school. We’ve always played as a team and obviously I couldn’t have done it without my past teammates,” Pickrell said.

“It kind of hit me. It has hit me before that I’m not playing anymore,” Pickrell said. “But when she said you’ll be missed, it is part of life I guess. But everybody misses it.”